lately we have seen quite a bit of action. on friday, herself went up to where uncle martin works and collected a trailer-full of wood. uncle martin is a saint. uncle martin works at a place where they make wooden things and they have a lot of off-cuts of untreated wood. as well as giving one of his kidneys to keep himself going uncle martin has also kept our whole family warm over this winter with wood.

i have a theory about superkidny. as he came from a man who loves wood, he has been missing the tang of resin. but try as he might, superkidny could not kindle the love of wood in himself. himself's love of football stifles wood-love. so, by a crafty process of sending out wood-loving rays through himself's ample belly, superkidny has managed to infiltrate my boy. all of a sudden my boy has become interested in carpentry. in fact it is more than an interest. it is an obsession. my boy is not one to do things by halves.

the trailer full of wood has interesting shapes. uncle martin has been making wooden dragons. the offcuts are therefore unusual. my boy had the idea of making some things with it. he has had a mate round who helped. here are some pictures of the finished products. 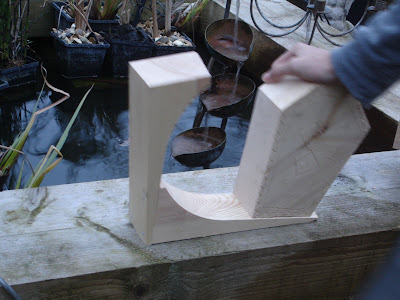 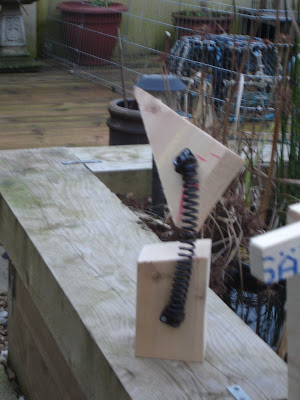 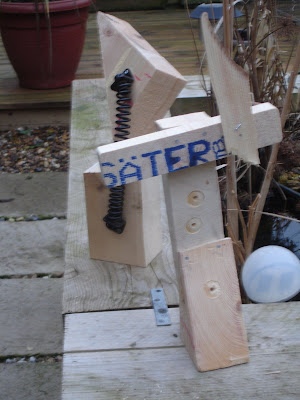 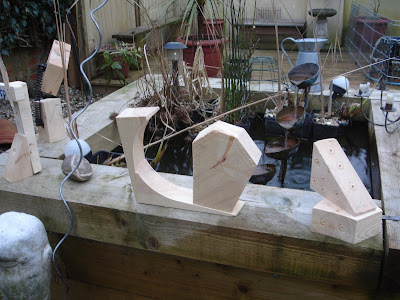 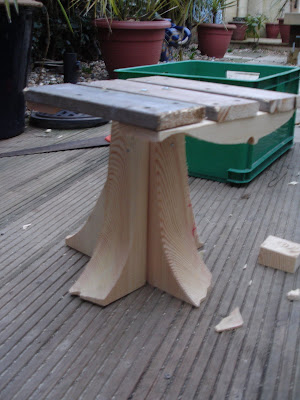 so frenetic is the rate of production that even herself cannot keep up with recording the masterpieces. since these photographs were taken further wonderful artifacts have appeared. there was a mace (now sadly de-constructed as it had been made from the line pole which was needed to dry washing), a candle holder of very solid proportions and a bird feeder which would happily accommodate a couple of eagles without their feathers getting ruffled.

the only drawback with all this is that we are again running out of wood to burn. it is a good thing it has turned mild...
Posted by joker the lurcher at 9:17 pm 8 comments: 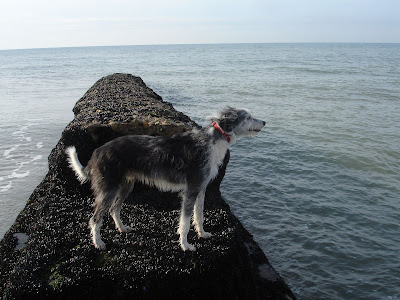 dear readers, here you can see me enjoying the sea air, standing astride a musselly groyne. this picture is all the more notable because it is taken somewhere that herself has been averse to visiting for some time due to her nerves. regular readers will remember that herself was signed off work some time ago with precarious trauma. one symptom of this was a thing called panic attacks when she went to the city where she had worked. now to most of us a bit of panic is no bad thing in terms of keeping us on our toes, but when it stops you breathing and feels like a heart attack it has to be taken seriously.

since herself was signed off work 18 months ago she has only made a handful of visits to this scary place. but on monday himself had a hospital appointment there. the logistics of the peeps' morning, what with having a third attempt at getting a towbar fitted to the car (successful this time!) and therefore having to drop arthur the audi in the city of dread, the only option was for herself to take himself to the hospital in himself's car and then spend an hour or so in the delightful company of young dave and i waiting for him to finish.

after himself had been delivered we set off for the beach. young dave looked a little forlorn. unlike our local beach, which is full of dead things to munch (it is now known as the 'beach of death' after an astute observation by mrs window) , this city beach had nothing on it but stones. not a rotting carcass to be found. young dave had to make do with a forlorn balloon, no doubt left by revellers from the night before. this proved a lot of fun until young dave sank his teeth into it. with a loud pop it vanished into a shadow of its former self. young dave wolfed it down before herself could grab him.

other news this week - herself has constructed an awning for the back garden. one of the side effects of the drugs that himself has to take to keep superkidny happy is that he now faces a very much increased risk of skin cancer and therefore must stay out of the sun. not content with a collection of parasols herself decided an awning was a must. she put an advert on freecycle, a place where things are free, asking for a sail. a lovely man got in touch saying he had two sails she could have. so yesterday i spent an interesting day watching herself building the awning.

she borrowed a hammer drill from mr next door, who has a wealth of interesting tools. there followed some hideous screeching noises while she drilled holes for a pole to hold one end of the awning. then the other end was sorted. after final measurements the sewing machine came out in order to tidy up the edges. and finally it was done. himself came out to admire it. at this point a high wind blew up, flapping the sail alarmingly. herself said that we wouldn't normally be using it on such a windy day so himself was not to worry.

i hope she is right. we live very near to a railway. it would not be good if the awning blew across the windscreen of a passing train...
Posted by joker the lurcher at 8:26 am 8 comments:

dear readers, today's post very nearly did not get written. herself came downstairs yesterday to find young dave running round with her glasses in his mouth. in spite of being asked nicely he was reluctant to relinquish them, but eventually herself regained control. the glasses are none the worse for wear apart from falling off her nose more than they used to.
monday was a day of high drama. mondays are one of the days we walk kinky the dalmation. monday dawned wet. the first task of the day was for the peeps to drop off herself's car at the towbar place. himself has a car which was lent to him by some nice people called motability and now he has super kidny the car has to go back. so the peeps had to buy another car. the new car does not have a towbar. and because of the trailer we need a towbar so herself arranged for one to be fitted.
all went well until herself tried to start the car. "ner, ner, ner, clunk" said the car. and that was it. the peeps tried some things called jump leads, although i could not see much jumping from my vantage point in the window. more drooping than jumping, if the truth be told. then herself tried connecting the car to the battery charger (which involved asking mrs rokit to put the extension lead through their window as herself cannot work out how to remove the battery). while the car was absorbing electricity the towbar man rang. it seemed that unless arthur the audi was there sharpish they would have to come back next week. as you cannot hurry a battery charger arrangements were made for next monday.

eventually herself had pushed enough leccy into the battery to start the car so she took it off to the battery folks to get a new battery. himself was then dropped off at work. this was when things started to unwind. herself decided to take me and young dave and kinky to the beach, in an effort to avoid extreme sports in the mud. but the beach was a bad idea. almost the minute we go there young dave found something dead. it was not only dead but had been highly spiced. no-one could work out what it was but it smelt rough, even to my tutored nose. the next thing that happened was that kinky took fright and ran off into the road. it may have been the rain that elicited this response as it was horizontal and sharp at this point. anyway, herself caught me and put me in the car before trying to catch the younger folks. young dave would not come back until he had finished every morsel of the dead thing. so herself set off after kinky, who was making a bid for home. kinky eventually headed into a church, and young dave was curious enough to jump over the wall, whereupon he was apprehended by herself.

"jesus christ!" said herself. then, realising she was in the grounds of the church, she said to young dave, "i shouldn't have said that. it was disrespectful, given where we are." young dave is not a spiritual being so this was lost on him.

herself turned her attention to kinky, who had set off at a pace. after some time herself realised that kinky was looking round periodically to check she had a human in tow. if this had been me or young dave herself would have left us to get back to the car, but as kinky is the dog of friends there is a certain amount of responsibility involved. anyway, herself came back to the car and we drove around for some time before finding kinky and eventually apprehending her, with the aid of a kindly man who was passing.

after kinky had been delivered safely home we crawled back into the house, stunned by the weather. but there was to be no rest for the virtuous. a visitor was due, for whom extensive preparations had been made the day before. the visitor was from socialist services and was coming to help sort out my boy's fear. in anticipation of her visit the blood from my tail had been cleaned off the walls and the general air of decay had been replaced by the smell of air freshener.

as herself settled down on the sofa to compose herself before the arrival of the visitor, young dave began to retch. and before he could be encouraged into the garden he had regurgitated the whole of the rotting carcass, all over our bed. and i have to say it was one of the least fragrant offerings i have encountered. herself and my boy squealed. my boy was dispatched to fetch air freshener, while herself, with her face buried in her jumper, scooped up the vile offering into bags. no sooner had the worst of it been pitched outside than the socialist worker lady knocked on the door.

she was a nice lady, and polite about young dave's advances, but it was clear that herself was not relaxed. no doubt the thought of young dave's fondness for his nether regions was preying on her mind. at last the visit was over and the lady left, promising to write a letter to the people who deal with fear.

meanwhile i am camping out in the chair. nothing would possess me to sleep among that miasma...
Posted by joker the lurcher at 12:17 pm 7 comments: