i am pleased to report that the new spray helped with the old nerves. still a little shaken by the loud bangs and crashes but managed not to disgrace myself. the peeps had company for dinner and in spite of several attempts on my part the most i managed to glean were some prawn shells. couldn't get near the delicious smelling fish stew and even more wonderful beef stew.

the burping pineapple had a brief outing but had to be confined to barracks after burping too much. 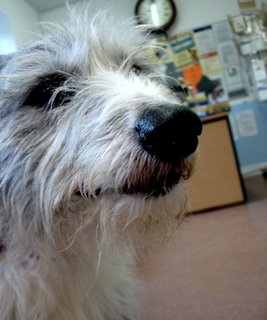 a most unsettling start to the day. rudely awakened by herself at about 10am. i usually like a lie in on a saturday but hereslf craftily waved the lead at me to give the impression we were off for a run. however, it swiftly became clear that a run was not what was planned.

there are a very limited number of places that i can be taken for a run. this is because of the incident with the car. some years ago i was out with himself in some woods near where we live. a rather foolish deer ran right in front of us and of course, my genes being what they are (a chap's at the mercy of his genes) i had to give chase. the problem with lurcher genes is they also have a setting which switches off all the useful controls such as pain monitoring and road sense.

all of a sudden boof! there i am lying on the road with a crowd of people round me. a large pool of blood is rapidly spreading which it dawns on me is from my front leg. there is an old man whose car it was that hit me and some younger people talking into phones. then herself and my boy arrive in what can only be described as a manner more suited to a car chase in a computer game. i am put on a blanket and into the back of the car and whisked to the vets. what follows is a blur. it seems i had split an artery in my leg which would explain the extreme lightheadedness and the copious amounts of blood.

it appears that my boy was a complete star. people with beefburger syndrome find change difficult. things happening out of the blue are not easy for them. but because my boy knew herself was helping the vet stem the blood he just stood where he was told and didn't attempt to take anything apart in the vets surgery, thus allowing them to fix me up. the next few days were touch and go and herself had to sleep on the floor with me the first night. but slowly i recovered and i'm now right as rain apart from some new scars for my extensive collection.

the upshot of this was that i am no longer allowed off the lead anywhere near roads. so i knew this morning that we were not heading towards a walk. au contraire, we were going to the vets. the vets is not my favourite place. there is nothing wrong with the people there. it is just that every time we go there they stick needles in me and put nasty things in places they shouldn't to see if i have a temperature.

i have been to the vets more than most, largely due to incidents such as the one i describe above. as well as having troublesome genes, we lurchers also have thin skin. if you add to this recipe living in an area with a lot of flints you will begin to get my drift. i have had more cut paws and legs than you have had hot dinners. herself is forever saying how glad she is that she took out vet insurance for me.

today's trip was one of the less traumatic ones. it seems all we were there for was to get some spray. this is to calm me down while the peeps are at tonight's firework display. it will be sprayed on a sock and then fixed on my collar and i will slide into a state of tranquility. this is good. the fireworks are very loud and even a laid-back chap like myself can get the collywobbles at times.

so peace and love dear readers, have a thoroughly chilled and karmic evening...
Posted by joker the lurcher at 11:15 am 1 comment: