dear readers, i have asked herself to help me with a very short post this morning, just to direct you to a new blog written by a dear friend of ours, which is a refreshing antedote to the daily grind in which we find ourselves mired.

and if you pop by, make sure to let her know who sent you.
Posted by elderly rock chick at 6:57 am 5 comments: 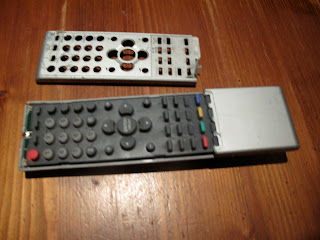 dear readers, here you see the sad remains of our zapper. there has been a certain amount of confusion relating to the telly lately. herself, as part of the ongoing "save money so bonzo can spend it" campaign, has moved her mobile phone provider to a much cheaper one which also meant she could get a free new phone.

as the old mobile phone provider was the same company that provides our broadband this meant that she could change the broadband provider to a cheaper one too, which she did with great speed. what she had not bargained for was that the telly digital box would no longer work as the telly was coming down the broadband wire. himself was somewhat peeved about this as he has a special 'wall to wall football' channel which also ceased to work.

herself settled down to research the issue and came to the conclusion that the only way round this was to buy a new digital box which would allow the 'wall to wall football' to be accessed. however in the meantime there was no telly at all coming down the broadband wire so the peeps had to go back to what is called 'terrestrial telly'. i am not sure why it is called this as the signal comes down a different wire from the roof.

the terrestrial telly has a different zapper to the digital box. this would be fine, but for the fact that the terrestrial zapper was a little the worse for wear, as a result of young dave having tried to change the channel from wall to wall football to the dog whisperer when no-one was looking. unfortunately for the zapper, young dave had to use his teeth, which resulted in a problem with the number 3 button. the peeps were aware that young dave had been at the terrestrial zapper because of the teeth marks, but until now have only been using it to turn the volume up and down so they were unaware of the number 3 button issue.

"why does it keep trying to find channel 333?" wailed himself (terrestrial telly only has the 4 channels).

"i think it must have been when dave chewed it up," said herself, changing to channel 33 with no appreciable effect. the screen was just as blue as before, as was the air.

when himself had left the room, herself got out the toolbox and de-constructed the zapper. this allowed the number 3 button to express itself again and thus gave access to 4 channels. the only snag was that the labels for most of the buttons were on the case. herself gleefully showed himself the newly operative zapper when he re-appeared.

"the only thing is, you can't see what half the buttons are for now, but i'll keep the top bit so we can use it to work out what's what." 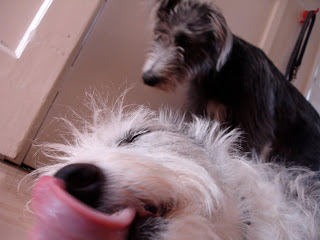 dear readers, yet again i must grovel and apologise for the lack of contact. it is a wonder i am able to retain my loyal readers with such a poor service. my problem is, as always, that herself is so busy horsing around that it is very difficult to pin her down to do my typing.

however she was shamed into finding a moment after an exchange of text messages yesterday with the gypsy. the gypsy, who has known herself for hundreds of years, keeps a quiet eye on the peeps from afar and reads my musings in order to gauge the level of chaos and madness in our house. of course when there are no musings she has to resort to her crystal ball, or to more modern methods such as text messaging.

last night the peeps were watching telly when herself's new phone gave a little dingle. it is a rather pleasing little toy with a touch sensitive screen. what this means is that pretend buttons appear on the screen and you press them, rather than real buttons like the old phone. the phone has a little stick that you can use to press the buttons, in the interests of accuracy. herself, needless to say, is in too much of a hurry to get the little stick out of the bottom of the phone, so tends to rely on her less accurate thumb.

anyway, the dingle was a text message from the gypsy.

herself was mortified that her poor approach to her secretarial duties had caused her old mate to worry. quick as a flash she texted back,

"i'm fine, great to hear from you. come and visit soon"

the gypsy replied that she would when she could but her dad is not well. this was when things went a bit haywire. herself's reply merely said, rather cryptically,

herself made the mistake of trying to be cool and use text speak. her next message said,

"SoS have spent the last half hour"

this clearly did not convey the fact that the peeps were snug on the sofa watching telly and the gypsy wrote back,

"Nope! Messages r garbled. Either your phone is [bust] or you r trying to tell me something that i am not getting. R u having an emergency that i need to seek aid 4?"

this last message was not discovered by herself until this morning so it is lucky that the gypsy had not summoned the emergency services. i suppose she knew that i was here keeping an eye on things...

as well as writing a post to let the gypsy know that we are still alive, i also want to welcome some new readers. young dave and i were charging around mrs collie's front garden, after a visit to mrs collie for herself to scrounge breakfast. i got into the car when asked but young dave, true to form, decided to pick up a piece of the magnificent bonzo's hoof and run round in circles with it. i should point out for the benefit of my more sensitive readers that the piece of hoof was no longer attached to bonzo - the farrier came yesterday to trim up his feet and put on new shoes and there are always tasty morsels of hoof left around afterwards.

herself was doing the usual thing of trying to look more interesting than what dave was playing with, unsuccessfully, it has to be said. it is rather poignant that she is less interesting than a discarded bit of horse hoof. just then some greyhounds came into view. one had a coat on and a basket muzzle just like the one i had to wear after the misunderstanding about the deer. the other one had a rather elegant embroidered collar. herself managed to grab young dave while he was making eyes at the lady greyhound, and got chatting with their people. it seems these lovely creatures are called lily and dennis. i am not sure what the people are called.

the magnificent bonzo and little libby came and peered over and through the fence respectively, hoping for carrots. the nice people said that next time they went past they would try and remember to bring carrots. herself told them about me being a world famous lurcher and they said they would try and find my blog. so in anticipation of them succeeding: