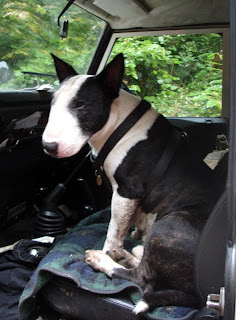 well, dear readers, today was an adventure to top all our others. i should have known that things were not going to be straightforward when i heard herself on the phone a while ago arranging this outing. but little did i know...

in our living-room is a contraption. for a long time i thought it was a tv. it has a screen just like a tv and little knobs underneath which i thought were for changing the channels. it did seem a bit odd that they all had the same programme on - some sort of inferno drama. but it became clear that the contraption had an entirely different purpose. it is a woodburning stove. which of course requires wood, in the form of logs. for a couple of years these have been purchased at great expense from a man up the road. however, what with the economy drive, herself decided to go to a place that was much cheaper, even though you have to collect them.

we set off, towing the trailer, in the general direction of the wood. after a fair bit of meandering around the countryside we met the lady whose logs we were buying at the pre-arranged place. she set off in her landrover down a lane, which became a track, which became a bog, until we pulled up in the wood. i was allowed to get out of the car as long as i wore my muzzle (as regular readers will be aware there have been one or two unfortunate incidents involving deer in the past). the log lady had a rather stout dog called charlie (who is pictured above). while friendly, charlie was a little too forward, so perhaps it was just as well i had the muzzle on or i might have been a victim of my hormones and given him a nip. i fear this would have been a mistake. charlie looks like a bloke who can handle himself. (indeed he has a special handle on his harness for heaving him into the truck).

anyway, herself loaded up the trailer with the logs and off we went. the log lady went ahead of us to open the gate. about half way along the track back to the road herself pulled up. it seems the dastardly trailer had again got a flat tyre. herself tried to ring the log lady to let her know we were no longer in convoy but there was no signal on her phone. luckily the log lady realised we were in bother and she and charlie came back. after an unsuccessful effort to jack the trailer up with a car jack, the log lady came up with a plan. she had a delivery to make nearby so she would lift the trailer, logs and all, onto the truck with the delivery and would then take us to a tyre place. 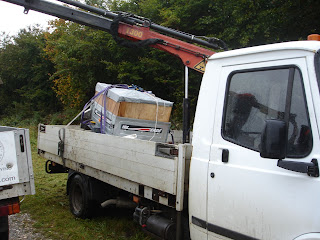 so back to the wood we went. herself and the log lady filled up a very large bag on the truck with logs. after a break for a cuppa and what looked like a rather delicious flapjack (no, dear readers, herself rather selfishly chose not to share it with me) we set off again. the delivery was dropped off and then we went to the tyre place, which luckily has seen this sort of thing before. the trailer was lifted off the truck (which luckily had its own crane for this purpose). here you can see the log lady operating the crane. 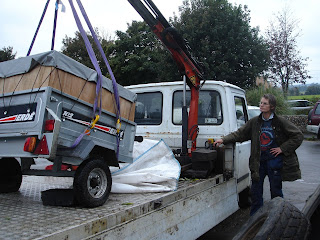 a very helpful young man sorted out the tyre and for good measure put a tube in both tyres to avoid this sort of tomfoolery again. when herself later recounted this to himself he reminded her of their honeymoon.

after profuse expressions of gratitude from herself the log lady headed off to chop up more logs and we headed home. herself had planned to hop into a hot bath but first she needs to move the logs into the new log store under the steps. before she can do that she needs to pump up the tyre on the wheelbarrow...
Posted by joker the lurcher at 2:42 pm 15 comments: