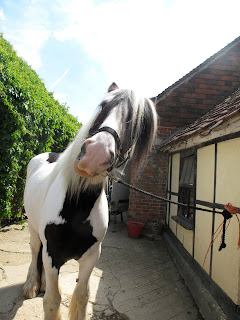 hello dear readers! i have finally managed to get herself to sit still and type for me. as regular readers will know, she has been thrown a little off kilter by the loss of her dad. whereas most people might want to rest and relax when things like this happen, herself, after a short interlude of calm, got back her taste for activity.

to be fair, some of the activity was thrust upon her. there was the small matter of the chickens, for example. one afternoon at work herself received a text from mrs toby to let her know that the magnificent bonzo had seen some rather tasty looking grass over the track to his field and had decided to go over and sample it. he had failed to take into account the fence in the way and had simply launched himself at it in his usual enthusiastic fashion. he had cleared most of it but the top rail had bitten the dust. herself persuaded miss shell, who gives her a lift home from work, that they might need to leave a little earlier than planned. no sooner had she returned to her own desk than her phone rang. it was my boy.

"we're just on the way back from college," he told her.

"oh good," said herself, "i'll see you when i've fixed the fence up at the field." so famous are the magnificent bonzo's showjumping ambitions that this needed no explanation.

"there's a bit of a complication," said my boy.

"i've got a cockerel in the boot." it transpired that the cockerel was surplus to requirements at my boy's college due to being unable to father chicks. had my boy not brought him home he would have been for the chop.

"just as long as you understand that we are not setting up cockerel rescue!" said herself, mindful of the fact that she and her colleagues deal with complaints of noise nuisance in the area. as it was obvious that the cockerel could not live in our small but perfectly formed back garden due to his vocal range he was taken up to the field to share with the magnificent bonzo. he was named george and was temporarily housed in a metal feed bin pending more salubrious quarters being constructed. bonzo appeared to be oblivious to his operatic warblings and indeed took something of a brotherly interest in him.

the rest of that week was taken up with finding some company for george and building him a house. the company side of it was sorted out by mrs rose, who has many chickens. she was able to supply the peeps with a lady chicken who was duly named rose. this was particularly apposite as mrs rose has a husband called george. the accommodation was slightly more tricky. herself designed a chicken house which was to be made from a large crate that the snake-charmers donated, clad with the leftover wood from the horse shelter in the field. true to form, herself went at its construction hammer and tongs. unfortunately the hammer part of this very swiftly left herself with a painful and unusable arm. it appeared from research on the internet that herself had acquired golfer's elbow. for someone who has only played golf once (and that on the other side of the world so presumably using the other arm) this had a certain irony.

the lack of a hammer arm meant that himself and my boy were drafted in to finish the chicken house. suffice to say that there was a certain amount of discord. in fact so much discord that george the cockerel seemed positively melodious. eventually it was finished and the chickens moved in. an electric fence was purchased at great expense to stop them being eaten by foxes and then things briefly calmed down.

shortly afterwards bonzo was due to go to uncle gary's hoof camp for some more lessons. he has now progressed to the module on "keeping your rider calm in spite of squirrels leaping out from hedges and scaring her", to be followed by "putting up with inane hoof-curling sweet-talk from middle-aged women". the latter is essential study for all horses. it takes a strong stomach and an iron constitution to put up with some of the gooey nonsense herself and the Hoard of Menopausal Women come out with.

anyway, on the way back to uncle gary's in the lorry the talk turned to the sometimes tricky business of keeping a hoss up on the windy hill, especially in the winter. an arrangement was hatched out whereby herself would work in uncle gary's stables in return for bonzo's keep. there will still be hay and food to buy but there will be a lot less hassle and a lot more company. so bonzo's friend libby is going back to her owner and the chickens were moved yesterday to uncle gary's. the chickens traveled in her maamship's cat basket and the chicken house followed behind on the trailer. i could have sold tickets to the performance of putting the chicken house onto the trailer. and indeed getting it off at the other end. but eventually the chickens were ensconced in chicken heaven under a tree in the field at uncle gary's.

this morning herself and my boy went up to uncle gary's. when they arrived they saw an ambulance. it transpired that the chickens had been causing trouble. when the horses were being led in from the field george and rose had been making chicken noises and scrabbling around in their house. to a horse unfamiliar with chickens the house would have looked very scary and the horses panicked and galloped off. unfortunately a young person who works there got injured in the middle of it all. fortunately she was not badly hurt but she was very shaken and bruised and everyone felt awful, especially herself and my boy. the ambulance people checked her over and said she was ok to go home so her mum came to fetch her.

so the chickens had to be moved from where they were to somewhere out of the way of horses. herself and my boy spent the morning doing the whole chicken house moving thing again, although they have now for it down to something of a fine art with all the practice. the chickens are now in a new place and all that remains is for herself to erect the electric fence and they will be fine.

i have just realised that the 'small matter of the chickens' to which i referred earlier has turned out to be rather less small than at first appeared. so you will have to wait until next time to find out what else has been occurring...
Posted by elderly rock chick at 9:27 pm 5 comments: 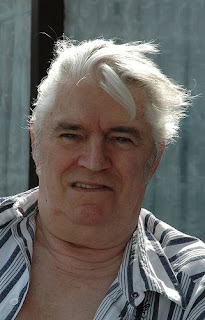 dear readers, again i have to apologise for not writing for so long. this time it is not just that i haven't been able to get herself focused. our whole family has been low and rather lacking in fun. this is because herself's dad has died.

shortly after the horsebox affair, which my readers will recall from my last post, herself received a call from her dad's wife to say that he had had a stroke. this was not the nice sort of stroke that dogs and horses enjoy but more by way of a sort of brain accident which left him in a bad way. herself went up to wales to see him in hospital and came back very quiet and rather sad. it seems he was not able to talk or move or do very much other than show with his eyes that things were not feeling all that good inside. for someone who had ridden a motorbike until he was 70 it must have been hard being stuck in hospital unable to swear at anyone.

herself rang every night to see how things were. for some time they stayed the same but then went downhill. on 15 may he died.

i was very fond of him. he had a soft spot for dogs and whenever we met he would give my head a scratch and say nice things about me. he was nearly as old as me if you take the dog years/human years thing into account. last week was his funeral and he was given what the welsh call a good send off, with jazz music playing him out.
Posted by elderly rock chick at 9:23 pm 10 comments: