jobz for the dogz 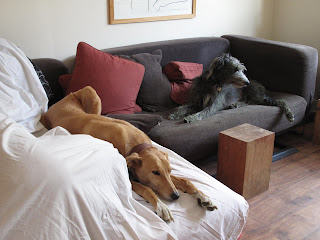 dear readers, i have to start with another groveling apology. as ever. that is, if i have any readers left, which i doubt after all this time. in the cut-throat world of blogging it is important to keep your reader's interest by occasionally writing something.

life has been busy as always. herself has been in the running for a promotion at work which has involved a lot of looking like a grown up responsible person, at least while at work. she was unsuccessful at this and remains a serf, so normal service is resumed on the grown up and responsible front. it appears that what let her down in her ambitions for global domination was the presentation that she had to give as part of the interview. the presentation had to be about reorganising the department. herself's presentation focused on the fact that unless the department made itself useful to its clients and the outside world, reorganisation would be about as much use as rearranging the deckchairs on the titanic. the feedback on her presentation was that she had not focused enough on what was good about the current structure, which rather suggests that she had not made her point forcefully enough.

herself was not helped in her attempts to look grown up and responsible at work by her dealings with the lift. herself works on the 2nd floor of the building. many of her colleagues take the stairs but herself takes the view that as she spends such a lot of her time moving the not insubstantial steaming piles left by the magnificent bonzo she does not need any more exercise. the lift has a lady's voice that tells you which floor you are on, and where it plans to go next. what is supposed to happen when it reaches the 2nd floor is that the voice should say: "second floor. doors closing. going down."

herself told her colleagues about this. they were of the view that the lift was becoming unstable and might break down at any moment. ignoring the possibility that this may have been a devilish plan by management to save electricity and improve the fitness of the workforce, herself decided to be a good citizen and report the fault. she toddled down to the reception desk in the front hall. there sits a lady in a smart uniform who is in charge of dealing with the public, and occasionally members of staff.

"i'd just like to report a problem with the lift," she said. "the lady in the ceiling of the lift thinks she is on the third floor and that she is going up."

the receptionist gave her a long look. herself persevered.

"the lady in the lift is saying 'third floor. doors closing. going up.' when as you know there is no third floor and even if there was there would be no 'up' from there as there certainly isn't a fourth floor."

the receptionist looked desperately round for security but was unable to find them. they were probably chatting to the lady in the lift. the receptionist promised to report the problem to the relevant department and went back to being icily polite to members of the public. i can't help but think that before herself had even made it back to her office rumours were circulating.

there is an upside to herself's thwarted ambitions. she has gone back to working two days a week. this means we see much more of her. and this week she has not been to work at all as she has taken a couple of days off. she decided it was necessary to be around as my old sparring partner lupin has come to stay. this is because mrs lupin has gone off for a few days to recharge her batteries. mrs lupin regularly sings arias to lupin which has led to him singing back, rather less tunefully. given my history with lupin herself thought it prudent to be around to mop up any little spills of blood. i am of course big enough to let bygones be bygones. at least as long as he keeps his skinny nose out of my bowl, and refrains from attempting mahler.

coincidentally, this week the downstairs is being painted. some time ago himself agreed to paint the downstairs during the long summer holidays that people who work in schools need to have. the long summer holidays came and went. himself made a start but sadly term started before he had got very far. herself embarked on a programme of snidey remarks about the half-finished kitchen. then girl in a trench e-mailed to say she would be down this week and would be able to put in some decorating days for the peeps. so you have the makings of a wonderful blog post - lupin, bleeding copiously all over newly-painted white walls as he is pursued by yours truly, while young dave sits with his paws over his ears, praying for a door-to-door salesman to call and distract me with talk of plastic windows. 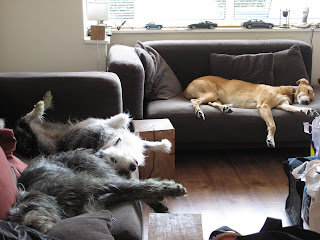 part of the decorating project is replacing the bookcases with shelves made from old scaffolding planks. herself plans to make a feature of the wood being distressed and therefore less likely to need dusting. i think after being exposed to lupin's singing any wood would be distressed. it might even be tempted towards self-immolation. herself has talked her buddy into building the new bookcases. he is by all accounts a dab hand with a saw. on friday they are going to buy the scaffolding planks.

we are also being visited by mrs captain and her youngfolk. and possibly the captain as well, although he may be otherwise engaged flying a large plane. they are arriving on friday and will be staying at her maamship's house over the road for the weekend. there is great excitement as the peeps haven't seen them for a couple of years. on friday mrs captain is going to be at a nearby village for choir practice with her old choir and will need to be collected at lunchtime on friday. she rang today to make the final arrangements. upon hearing that herself would be fetching scaffolding planks on friday before picking her up, mrs captain said that she could feel some blog-fodder presenting itself in this sequence of events. she has not even heard about the operatic lurcher...
Posted by elderly rock chick at 8:20 pm 10 comments: