something in the air 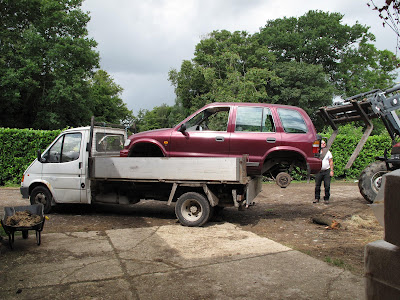 i have finally persuaded herself to sit down and type for me so i am hoping that she will remain focused for long enough that i can finish this post. there is nothing so frustrating as having a typist with the attention span of a gnat when you have paws and cannot take over.

today was a day filled with interest. alas, i was not present for most of it so i have had to piece it together from what i have managed to overhear.  young dave is often allowed to tag along with herself when she rides the magnificent bonzo but on this occasion both of us were left at home due to today's ride being along roads as well as paths.

the road part of today's ride appeared to have gone fairly smoothly, apart from a fracas with a gate.  things only started to unravel when herself and the magnificent bonzo turned down the bridleway leading back to the farm where he lives.   some tents came into view, although  not your usual sort of tent of the type the peeps take camping.   these tents were huge.  they apparently belonged to the circus.  the magnificent bonzo is not easily fazed and walked past nonchalantly.  however in the next field were some creatures that made him grind to a very sudden halt.   it turned out that these beasts were camels.

the magnificent bonzo has on occasion been likened to a camel, mainly because of his prehensile top lip, which he uses to grab handfuls of grass with.  this lip has a life of its own.  at their first meeting, the magnificent bonzo very gently touched herself's face with his lip, causing her to fall in love with him immediately.  history does not relate whether himself used the same seduction technique.

herself decided that it would be good for the magnificent bonzo's education to meet the camels.  his education has been wide-ranging and random  (he must be one of very few horses outside the military who has met two trombones.  one was played by a retired shepherd up on the hill where he used to live.  the shepherd would take the trombone to the middle of a field to practice to avoid annoying the neighbours.  the other trombone belongs to a jazz musician who lives near his stable).

while herself may have wanted to broaden the magnificent bonzo's mind by introducing him to interesting beasts from foreign climes, he had other ideas.  after a lot of snorting and huffing and puffing he took off up the bridleway with undignified haste, and was only reined in with some difficulty by herself.

back at the farm, herself left the somewhat flustered bonzo to have his breakfast and went in search of uncle gary to have a cuppa.  she found him looking frazzled.  the reason for the frazzlement was all too clear.  george (usually known as person george to differentiate him from chicken george, who is my boy's cockerel) was in the process of taking uncle gary's old car to the dump.  whereas many people would call up a scrap merchant to have the car collected,  george had decided to have the car put on the back of his truck by the tractor driver and drive it there himself.

regular readers will already have seen the flaw in this plan from the photograph above.  george has the same approach to thinking ahead as herself.  he had not thought it might be a good idea to measure the car and then measure the truck to see whether the car would fit on the truck.  (as soon as herself showed the pictures at home himself said "he's just like you!")  herself's idea as to how they might resolve this issue was that they should drive the car into a wall and scrunch it up a bit, thus making it shorter.   thankfully no-one took this seriously, not least because by this stage the car had been relieved of its wheels.

uncle gary has known george a long time.   he had realised george was not the slightest bit deterred by the overhang at the back of the truck and was about to leave to go to the scrap metal place with the car dangling.

"i'm beginning to feel a little queer!"  said uncle gary, ever the master of the double entendre (uncle gary was on the stage in a previous life).  he had visions of the car falling off onto the bonnet of a police car and his career as an upstanding citizen coming to an abrupt halt.  in any event, off went george, making very little concession to his unstable load in terms of speed or cornering.

after several anxious phone calls it transpired that george had missed the car breaker's yard by 10 minutes and would have to bring the car back and try again on monday.  at least this gives my boy an opportunity to participate in the fun, having been unavoidably detained by a warm bed on the occasion of the first attempt.

part of the process of preparation for the trip to the scrapyard was emptying the car of all its clutter.   uncle gary takes car clutter to new heights.  one particularly fruitful compartment contained a vast amount of coins.

"i'll take these and get them changed in one of those coin machines," said herself.  she collected a further pile of coins from the tack room and bagged them all up.

fast forward to the afternoon, when herself managed to persuade himself to accompany her to tescos.  on account of the collie-wobbles herself is not up to visiting supermarkets alone.  they located the coin-changing machine and started putting in handfuls of coins.  about a third of the way through the machine made an uncomfortable noise and ground to a halt.  a sign flashed up saying the peeps had to call an operative.  himself went off in search of one, leaving herself quaking by the machine.

a lady finally appeared.  after putting in numerous codes she opened the front and revealed the mechanism.  it was apparent that the machine had been defeated by the stuff mixed up with the coins.

"does your friend have a dog?" asked the lady (herself had explained that she had come by the huge amount of coins because of her friend's car going to the dump rather than having been robbing charity boxes).

"er, yes," said herself, "he does have one or two dogs."  in reality the question of whether uncle gary has a dog is in the same category as asking whether the pope has a balcony.  uncle gary has a multitude of dogs, ranging in size from very small to very large.  the thing they all have in common is they all look as though they have run into a wall and squashed in their faces  (as i am a dog of the pointy-nosed variety i am possibly biased).

"that's the problem," said the lady, "its all the dog hair - its blocked up the machine."  she proceeded to brush out the innards of the machine with a paintbrush, causing clouds of it to waft around in the air.

by now himself was looking less than keen on the turn-your-loose-change-into-untold-riches project.  he was mightily relieved when the peeps were able to retrieve their vouchers from the machine.

"maybe next time it would be an idea to hose the money off first," he suggested.

i feel that this could have an equally, if not more, disastrous effect. wet dog hair would be harder to shift with a paintbrush...
Posted by elderly rock chick at 9:08 am 7 comments:

a little something to watch...

i know many of you are finding the long period of radio silence somewhat frustrating so here is a video of my boy driving a ferrari. he was given the ferrari driving day by her maamship for his birthday and christmas and it has taken until now for the peeps to book it and make it happen. as you will see, my boy is something of a chip off the old block in terms of his petrolhead tendencies.

and a special hello to girl in a trench, whose birthday it is today and who is working in a hot place with old things.
Posted by elderly rock chick at 10:14 pm 6 comments: