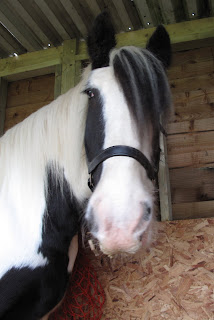 dear readers, yet again i find myself starting a post with a grovelling apology for my absence from these parts. since the arrival of the new family member things have been somewhat busy even by our standards. quite a lot of the busyness was hoss-related but, as is the way with the peeps, circumstances conspired to cause further chaos. much of the chaos has been excellent blog-fodder but herself has been too busy to assist me in recording it.

the hoss arrived at the end of october but for reasons relating to arthur the audi young dave and i did not meet him for some time. so we were reduced to eavesdropping on hoss-related conversations to find out about him. he is a large hairy fellow called bonzo, who is showing the beginnings of a fine moustache. were he a lady he could join the Hoard of Menopausal Women with such a moustache. he has big shaggy legs and a wiggly top lip like an elephant's trunk. when young dave and i finally were introduced the hoss put his huge head down and gave us a little sniff, before nodding vigourously. i feel we are going to become good friends.

once the hoss had arrived herself had to sort him out a shelter. he lives on a very windy hill in a very windy field belonging to herself's friend mrs collie. as mrs collie is very soft-hearted about animals it was essential that the hoss had a shelter very soon. otherwise mrs collie would have parked him in her living-room which, given herself is cleaning mrs collie's house in return for the field, would have added considerably to her workload.

hoss shelters, it seems, are quite expensive. herself trawled the internet and spoke to local shelter builders but was unlucky. luckily mick the builder was nearby, doing work on her maamship's house over the road. mick the builder and his brother martin have been doing building for the peeps for years and are used to herself's ways.

"can you build me a hoss-shelter?" asked herself, as mick the builder struggled with an acrow prop and a large metal beam.

"when do you need it done?" grunted mick the builder.

"yesterday," said herself. i think this may have been slightly tongue in cheek. mick the builder, while very good at building, has not yet mastered time travel.

the shelter was built and here you can see the hoss enjoying a haynet in comfort. but as herself had the attention of the builders and they had a little slot before their next job, the peeps decided to have a wall taken down and the leaky kitchen roof mended. this entailed the living room being encased in a plastic sheet and made to look like a crime scene. the ensuing untidyness and distraction meant that young dave was able to eat yet another pair of herself's glasses. this brings the total almost into double figures, if you include the ones that herself ordered off the internet that young dave ate when they came through the letter box, and of course the various sunglasses. herself was surprisingly laid back about this. she said she had a spare pair at work.

when she got to work she found she did not have a spare pair. after a couple of hours of peering at her monitor with the picture zoomed in she went out and bought some reading glasses from the optician over the road to the office. the new glasses were called 'so slim' which made the peeps laugh. herself is not very slim at all.

the next day herself got into work and could not find the glasses. she had put them in her bag when she left the house but they were nowhere to be found. young dave's name was mud. at lunchtime herself went to boots and bought another pair of reading glasses. these ones make her look like michael cain. when she got in the car to come home she found the first set of replacement glasses under the seat. why does this not surprise me?

as for the trials and tribulations of arthur the audi, i think i am going to have to tell you about those another time. there is only so much a chap can cope with at my age...
Posted by elderly rock chick at 7:13 am 3 comments: