dear readers, i will not even bother with grovelling about my lack of communication. by now no-one will be here to hear my snivelling anyway. in the past, when life has thrown its little slices of chaos in her direction, herself has been in the habit of drawing comfort from the blog-fodder that it will provide. many is the time when, rather than bursting into tears, she has chuckled quietly at the sheer silliness of it all and consoled herself with how much i would enjoy recounting events to my readers.

lately she has fallen into the habit of taking life a little too seriously and i have had to point out that not only is this bad for her, but it is bad for me too. after all, i have my reputation as a world-famous author to think of. so when the saga of the futon began to unfold, i made sure she recorded events with her camera.

a futon, for those readers who have not had the pleasure of meeting one, is a mattress made of cotton and more cotton, squashed into a cotton cover. it is worthy and ethical and environmentally sound. its one drawback is that it is not very comfortable. that is to say, the only way to make one comfortable is to heave it up and roll it round every day to fluff up all the cotton. modern life being what it is, most futons remain unfulfilled on the fluffing up front. ours was no exception and the peeps had been waking up with aching bones for quite some time. eventually herself decided enough was enough.

"we'll just have to get a mattress with springs!" she said.

"we'll save up for one," said himself, ever the sensible one.

"that's in case of emergencies."

regular readers will recall that herself is not very good at waiting. after another night of a sore back herself decided that this was indeed an emergency. no sooner had she mentioned the mattress idea to her maamship than she had been given details of the correct mattress to purchase and where to purchase it from. an order was duly placed on the appropriate website for mattresses.

herself thought it prudent to mention this to himself on the basis that it would be a rather large delivery to pass unnoticed. once himself had got over his irritability at having his tax rebate usurped he was pleased at the prospect of a comfy night's sleep and asked herself what she proposed to do with the futon.

"i'll put it on freecycle," she said. freecycle is a website where you can advertise things that you don't want so other folks can have them. herself is a frequent visitor due to her de-cluttering tendencies. as soon as the new mattress had arrived the futon was advertised. the peeps left it folded in half on the bedroom floor. as the bedroom is not all that large this meant they had to climb over the futon every time they went in and out.

"never mind, " said herself cheerily, "its only for a day or two!"

the first advert drew some interest but unfortunately not from anyone with the means to transport the futon to their home. these futons are heavy things and are not amenable to pedestrian travel. so herself put it on freecycle again. by now a week had passed. several people got in touch.

after work she has to drive back to pick my boy up from college, which is another 21 miles. they she and my boy go to sort out the magnificent bonzo (uncle gary lets him out into his field on work days which saves even more driving). this is another 22 miles. then they have to shovel out his stable, get him his hay and water and his dinners and fetch him in from his field. herself then has to spend a few moments hugging the magnificent bonzo and getting all the office nonsense out of her head after which she and my boy drive home, another 9 miles. as it is 2 hours between leaving work and getting home, herself tends to fancy a little rest when she gets in, before she goes out again to a weekly meeting where she makes the teas so has to be on time.

on this particular monday the rest bit was not on the menu. as herself and my boy opened the front door they were greeted by the sight that is recorded in the photo above. while it looks like a rather large person lying down, i can assure you that it is the futon. himself had started to bring it downstairs ready for the person to collect it. it had then got stuck.

my boy dissolved in giggles and proceeded to lie down on the futon. young dave and i came out to see what the fuss was and were almost crushed as it slid further down the stairs. herself edged round and went into the living-room while himself and my boy tried to drape the futon over the banisters. it was not particularly co-operative. himself at this stage began to get tetchy, which set my boy off into further giggles. when himself began to shout herself decided it was time to leave for her meeting.

when she returned later on the futon was no longer on the stairs. herself breathed a sigh of relief. unfortunately her relief was short-lived. as she went into the living-room she was greeted with the following sight: 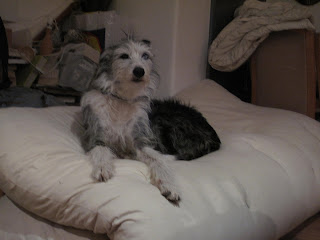 while she was of course pleased to see yours truly, she was less pleased to see my new bed. as the more perceptive of my readers will have deduced, the futon was still here.

the following day herself got in touch with the next person who had replied. she stressed the general air of the surreal that surrounded the "give away the futon" project and extracted a promise from the potential new owner that they would come that very afternoon to collect it.

tuesdays are the same as mondays in terms of mileage, the only difference being that herself does not have anywhere to go out to once she is home. when she and my boy finally opened the front door on tuesday evening and rushed into the living-room, the futon was still there.

"you couldn't make this up!" said herself, "are we destined to have a giant dog bed with us for ever?"

as she put the kettle on (a figure of speech, dear readers, and nothing to do with being sartorially challenged) the door knocker went. at the door was a man with wonderful boots and long curly hair. he bore some resemblance to an ageing rock star.

"ah, you've come for the futon!" cried herself, dragging him inside and closing the door before he could make his escape. had the man come to try to sell us new windows, or indeed an electric guitar, he might have been somewhat surprised. regardless of his primary purpose in paying us a visit, he would not have been allowed to leave without taking the futon with him. fortunately he was the new owner of the futon. without further ado the beast was heaved into the back of his car and given a send-off more appropriate to the launching of a luxury liner.

the only member of the family who was sorry to see it go was me. i have had to revert to slumming it on the sofa...
Posted by elderly rock chick at 10:16 pm 8 comments: