my kingdom for a hoss 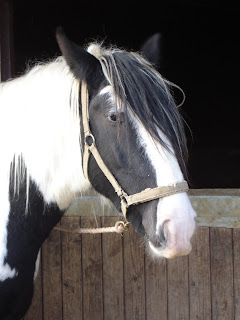 dear readers, much has been happening of late. but the most notable thing that has happened is that we are to have a new family member! he is large and hairy and by all accounts a thoroughly nice chap.

when i first saw a picture of him i was rather alarmed. he is very large indeed. he is so large that there is no way that he would ever fit on the sofa. or indeed in the living room. or the house. but i need not have worried. herself had a plan. she has a friend with a field opposite her house. the new family member is to live in the field, in return for which herself is going to clean her friend's house every week.

i was also concerned as to how on earth the peeps were going to afford to feed such a large animal. the saying 'eating like a horse' was invented for a reason. but herself has that covered too. she is doing her maamship's gardening in return for hay and cleaning for the snake charmers in return for sacks of horse food.

and for all the other expenses like horseshoes she has come up with an ingenious plan. it will be possible to sponsor bits of the horse! the original idea was just to have people sponsoring a hoof. but as is the way with herself's ideas, the idea morphed into something altogether more complicated.

the snake charmers jumped in first and bagged their favourite body parts. the young snake charmer is going to sponsor the face. this is because she loves horse noses. mrs snake charmer is going to sponsor the mane, and has negotiated the right to tie ribbons in it on special occasions. mr snake charmer originally expressed an interest in sponsoring the wedding tackle, but swiftly changed his mind when he heard that part of the sponsorship arrangement involved being allowed to groom your body part when ever you wanted to and being given a photograph of your body part to hang on the wall. while there is no doubt that the wedding tackle on a horse is a sight to behold, hence the saying 'hung like a horse', having a photo of it on your wall might lead to gossip. particularly if, like mr snake charmer, you work in a school.

my boy, needless to say, was scathing about the sponsorship plan.

"are you going to have signs all over the horse? will there be one on the tail saying 'sponsored by marks and spencers'?" herself mulled this over for a while.

"you've given me another idea!" she said, "i can sell advertising to local businesses!"

i am not sure what the horse will make of this. he does have a lot of white areas on him but he may draw the line at having the name of the local butcher scrawled across his rump...
Posted by elderly rock chick at 6:33 am 9 comments: