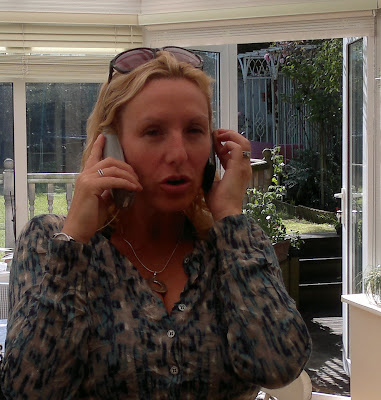 dear readers, in an effort to keep up the newly re-established writing habit, i have persuaded herself to write about today's adventure.   the background requires me to refer to matters pre-dating today.
as i have mentioned before, herself is a little flakey at the moment.   the collie-wobbles do not help with ones confidence.  earlier in the week she was round at her friend kt's house for coffee.  kt has an issue with her paperwork.  herself offered to help tame the paperwork and in return kt is going to provide advice to herself on a number of things, including style.  this came about because herself happened to mention that she could not bear to look in a mirror and that she did not have any full length mirrors in the house.  kt promptly steered her to a mirror which had the effect of making herself cover her face and squeal.   it was obvious that she needed some sort of boost.  an appointment was made for today for the paperwork and style session.
when herself called to make sure things were still on, kt told her that she had no wheels as her car had died.  she was going to try and hire a car for a few days while she bought a new one.  herself offered to drive kt to the car hire place and it was agreed that the outing would incorporate a trip to marks expensive to purchase certain foundation garments.  these are necessary in order to avoid looking like a sack.  those of you with long memories will recall that on a previous occasion herself was taken to marks expensive by her maamship for exactly this purpose.  the garment purchased on that occasion no longer fits and was abandoned by herself some time ago.
when herself arrived at kt's house she found kt on the phone.  more accurately she was on two phones, as you can see from the picture.  this was something to do with the car hire plan.  herself suggested they just get in the car and drive around until they found a car hire place.  on the way kt updated herself with the full story and explained how she had to buy a car very soon or there might not be any cars for sale anywhere (kt makes herself look patient).  herself took a lofty tone about the whole matter.  only someone who drives an old skoda would dare to get lofty about buying cars.
sure enough, they found a car hire place soon enough.  the only trouble was that it didn't have any cars until tomorrow. kt was reeling from herself's discourse on the merits of patience so she agreed to pick one up in the morning.   they then turned towards marks expensive.
i will not dwell on the whole bra-purchasing saga.  it bore a distinct resemblance to the previous visit, with the added complication of herself's current heebie-jeebies in shops.  there was some amazement when herself came out of the changing room in the bra.
"you look like you have lost half a stone!" said kt.  there is some scientific reason why hoiking up the ladies should make you look thinner but i am not sure what it is.  whatever it is, herself looked less like a sack afterwards.  as they were walking back to the car, herself mused in wonder at the size of her new bra.
"i'm a 38d! that's quite big! no wonder the other one was too tight."
"my dear," said kt, "you're practically a porn star!"
i'm not sure i'd go that far. mind you, it depends how far the re-style goes...
Posted by elderly rock chick at 11:41 pm

Always always always I end up smiling through reading your blog Joker. Herself is lovely inside and out and you can tell her that from me please. I do totally understand about the mirror thing as I've long since consigned our full length mirror to be forever hidden behind a massive stack of boxes waiting to go up in the loft! As this stack includes our Chrimbo tree you can imagine it is a stack of some long standing.

I hope the collie wobbles and heebie jeebies are easing off a little ... a lot would be even better.

I bought myself a new bra two days ago, sadly my girls are going in the other direction. 34A, they're shrinking.

This honest, open writing makes me feel as if I am as close as your living room. Thank you for welcoming me in. I love it here. (I recently purchased new under garments myself.)

I probably need to shop for some "supportive undergarments" myself, but quite frankly I hate wearing them -- I only wear them when I leave the house, and only because I have to. Consequently, they last a long time. I'm glad herself survived her shopping expedition.

Your post brought to mind this scene from the film "Beaches"

Hope herself gets a good laugh from it, and that it's not too risque for you!

Excellent! Lol!
Me thinks a trip to shops is in order :)

herself has asked me to add a little update to this post. for those readers new to the world of undergarments, a useful tip. bras are far more comfortable when not full of bits of hay.