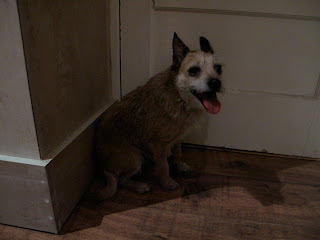 dear readers, thank you all for your good wishes for my recovery.  i am now back to normal and much relieved to no longer be in pain.  this evening young dave and i had a surprise.  mrs next door knocked on the door saying that there was a little dog running up and down the road.  herself, being a lover of animals, put on her coat and joined mrs next door in trying to ascertain what the little dog wanted.   herself immediately recognised it as being one of the little dogs from next door but one.

the peeps had been over the road at her maamship's house when the new next door but one moved in, giving them ample opportunity to view her and her two little dogs.  and a few days later the same little dog had been found in the road, having escaped from the garden through a very small gap.

i have to say i was at first rather concerned at the appearance of  a canine visitor.  young dave, however, was thrilled.

"look joker, they've got us a toy dog!" he beamed.  it was only when he approached the little dog that he realised it was alive.  and not only that, it bore more than a passing resemblance to the chihuahua that chases him at the local park.  young dave circled the little dog very cautiously, sniffing its ears.

the evening has proved entertaining.  young dave is huge compared to the little dog but is very alarmed every time it moves.  the peeps were hoping to have an early night but are rather worried about going to bed before the little dog is claimed by its owner.  i think young dave and i may have to share our sofas again...

ps: the little dog's owner arrived to collect her at 10.45 so all is well!

Oh, sounds like you may have a little Houdini moved in to your lane - lucky for him you found him. What a lovely voice you have, I thoroughly enjoyed listening to it!

Joker, I want to come and live at your house. It seems something interesting is ALWAYS happening there! It did make me laugh imagining Dave's caution after his recent experiences with the chihuahua ... I guess size is not always a good indicator of a tendancy to dominate! xx

Woman in a Window said...

Yup, never a dull moment. Toys in all shapes and sizes.
xo
erin