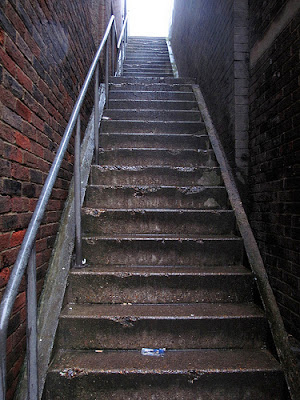 dear readers, it has been ages since i wrote, for which i can only apologise.  as you will know, herself has not been herself lately.  she has been off work since january with the collie-wobbles.  this takes the form of an allergy to a number of things, including supermarkets, crowds, people standing too close behind her, people shouting, people looking angry, or in fact just being people.  as you might imagine this has had a rather debilitating effect on her, and indeed on the whole household.

the only way she can cope with a supermarket is with a minder.  my boy has proved to be particularly good in this role.  he has years of experience of supermarket fear.   when this was at its worst herself came up with a strategy for getting the shopping done, without having to leave my boy at home, where he might have got up to untold mischief.  as my boy was already conditioned to the smell of lavender being relaxing, all herself needed to do was find something in the supermarket that smelled of lavender and my boy would calm down.   so she and my boy would enter the supermarket, dash to where the bubble baths were displayed, and heave the top off a lavender one, whereupon my boy would inhale deeply and calm down.  my boy tried to persuade herself to try this but as the peeps now shop at lidl, which tends to have an unusual approach to layout and a rather random selection of products in the personal hygiene field it was not a success.  they had had to content themselves with shopping at the speed of light in order to get out of the shop before dizziness and queasiness make it untenable.

there does not appear to be much likelihood of herself returning to the legal world and she therefore was referred to a person called an occupational elf in order to be assessed for retirement.  the elf said she was not mad enough to retire.  a second elf was asked to give a view and came to the same conclusion.   however, herself cannot do her job and so she is likely to be dismissed.  call me old-fashioned but i can't help thinking there is something illogical about all this.    it does give us more time with her and the magnificent bonzo is getting ridden pretty much every day so every cloud has a silver lining.

i am hoping now i have persuaded her to get back at the keyboard i might be able to keep in touch rather more effectively than i have been doing.  i hope you are all well and keeping your peckers up.  (for the benefit of my reader in canada 'keep your pecker up' is not as rude as it sounds).
Posted by elderly rock chick at 10:55 pm

I have missed you both:)

Sorry to hear that herself is not up to the legal world, or the supermarket. Sending love and lots of hugs.

Great to hear from you but sorry herself is still with the bad nerves. Supermarkets are horrible, yet necessary places and I, too, need company in order to endure the experience.
I hope all else is well. Take care.

Sending good thoughts to you all over the bloggersphere.

I feel for herself, and I send lots of hugs to you both.

Aw, hugs and supportive arms to herself. It is always good to hear though. Perhaps a new career in horses?

I'm not a fan of shopping in places where hordes of people are, which is why I tend to shop in a store that is open 24/7, and shop either late at night (after 11) or early in the morning -- 3-ish. There are usually very few customers in the store at that time. This strategy would not work, of course, if the store closed during the night.

I am sorry herself is not up to her legal work. Sending good thoughts her way.

Glad to see you pop your head above the parapet again. Look forward to seeing some more. xx

I'm sorry to read that these elfs have not been helpful on herselfs behalf Joker. I hope that the colliewobbles ease as although I fully appreciate your love of having herself about the place more of the time I'm sure she'd like to be able to venture forth without fear of an attack of wobbliness. It must be very trying indeed. I am a big fan of WOLs idea of shopping outside of peak times ... a strategy I often use myself as I'm not a great fan of crowds and feeling hemmed in.

Much love and hugs from here. xx Jos