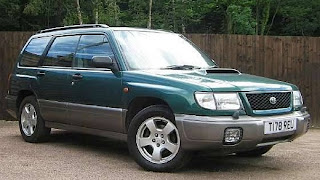 dear readers, here is a picture of a car very like our new motor. the new motor is called gerald and the peeps are hoping for a little more luck than they had with arthur the audi. as regular readers will recall, herself bought arthur the audi with the remains of her redundancy money. he was a most luxurious vehicle and went very fast but after some months things went the way of the pear, as they have a habit of doing in these parts.

arthur's little problem became apparent at a most inopportune moment, when the next-doors had borrowed arthur to make an important trip to the west country. water suddenly flooded into the footwell and soaked mr next-door's feet. it transpired that this was a problem not unknown in audi A6s. herself got on the net and read about it in some detail. i will not bore you with the technical details but it all comes about because a very tiny drain hole under the bonnet gets blocked, causing water to pour in through the heater vent.

this would not be quite so bad were it not for the fact that the clever people who designed these vehicles had decided to place the car's brains in the floor. just where the water ends up is the computer that works all the electrics. and what do you know - when the computer gets wet all the electrics go funny. the car locks itself with no warning. this is very funny if the keys are inside and the owner is outside. the car flashes its indicators randomly. this can perplex other drivers. sometimes the indicators stay on and don't flash. this happened when the peeps were towing mrs next-door's car to the garage and could have resulted in a double whammy of an accident. there are many other symptoms of a wet brain in a car, most of which give the impression that the car is haunted.

the local garage was unable to ascertain the cause of the water so herself reluctantly booked arthur into the audi dealers. it transpired that the problem was indeed caused by the blocked drain holes and that it would cost a lot of money to fix. the computer part on its own was over £600. herself could see no option but to have the work done and used up the last of the 'emergency cushion money' which the peeps had in the bank in case they needed to buy cushions in a hurry. the bill came to over £1,000 so it is lucky that we have plenty of cushions already.

the following week, while cruising down a canal in scotland, herself received a phone call. it was the audi dealers, calling to tell her that her car was subject to a manufacturer's recall in respect of a problem to do with blocked drain holes.

"i know all about blocked drain holes," squeaked herself, "you folks have just relieved me of over a grand to sort this out!" needless to say, matters did not rest there. on our return from our hols herself engaged in protracted correspondence with the local audi dealers and audi uk over the refund of the money. it was not until she made it clear that a) she was a lawyer and b) if the money did not turn up pronto she would see them in court, that a cheque miraculously appeared.

herself thought this was the end of the matter. but a couple of weeks later arthur had to go in for his yearly MOT test. he failed miserably and herself had to shell out yet more money to fix him up so he could be driven. £800 later arthur was in the middle of his re-test when the brakes jammed on. the garage phoned herself. it appeared that arthur needed a new brake servant because, you guessed it, the drain plugs were blocked again and water had been sucked into the brake system. the garage stripped everything down and wrote herself a report which she could send to audi. arthur was off the road for over a week while the part was sent from audi, who had run low on stocks of them. this is hardly surprising given this masterful piece of automotive design.

while arthur was off the road herself was lucky enough to borrow her maamship's audi tt, a vehicle of modest size but great style. unfortunately young dave and i are not allowed in it due to young dave's unsavoury habits. also unfortunately, it is a rather low slung beast and could not be trusted to make it up to the hoss's field without becoming impaled on the rocky track. herself therefore spent several happy nights striding along the track to feed the hoss in the dark in the face of horizontal wind and rain. arthur's name was mud, as was the field.

no sooner had arthur returned than herself was yet again in correspondence with audi. this time they did not put up much of a fight and a cheque to pay for the brake servant was soon winging its way to us. by now it had become apparent that a car with greater ground clearance was going to be needed to get up to the field but herself had fallen out of love with arthur anyway so did not feel in the slightest bit sad to see the back of him. and so we are now the proud owners of gerald, having part-exchanged arthur.

gerald is a very pleasant vehicle and apparently has heated seats in the front. not that young dave and i are ever going to get to try them. the heated seats have come in very handy for herself as she is rather battered and bruised, having fallen off the hoss twice in just over a week. i will save that little saga for another post...
Posted by elderly rock chick at 3:10 am

Good to see you Joker. I hope Gerald will proove a better bet than Arthur. Vorsprung durch not-bloody-Technik-enough-by-half eh?

The heated seats are fun. Wait until dearly beloved dozes off then switch on ... upon awakening he'll have a sneaky suspicion that he's sitting in a puddle (it really does feel like that!)

Joker, this is a very useful website if you have a new car (or before you buy one!). Suggest herself has a good browse.
http://www.honestjohn.co.uk/carbycar/index.htm

Good thing abut Gerald is that you can fit a couple of bales of hay in him!

That looks like a Subaru!! Yeah- great cars- I have one too- so of course! No, really- all wheel drive,in Vermont I really need this and very little trouble, great in the snow. Of course around here they abound. Every parking lot has more than ten!

Ah yes, green and Gerald works for me as I'm not very good at cars. I only wish that cars out here had some real colour other than sludge. It is very hard to find one sludge coloured car amongst so many other thousands of sludge coloured cars in a carpark the same size as a football pitch.

Sorry to hear that the hoss isn't co-operating - maybe you could install the seat warmers from the car into the saddle?

I love the seat warmers in my car because that nothing like a toasted bum to make my heart glow.

Good thing you're a lawyer, helps to sort things out. Hope the new car works out. And do try and stay off your arse. Just sayin' :)